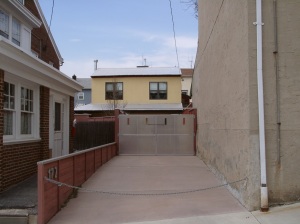 This house is so hidden that it can’t be easily photographed. Situated behind the other houses on the street, its front is 70-plus feet back from the sidewalk and blocked by some ominous but design-y gates with slots resembling machine gun emplacements. On second thought, maybe the gates look as if someone rolled flat the alien robot, Gort, from “The Day the Earth Stood Still” and made something functional out of him. 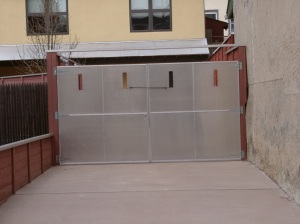 The plans were drawn up in 2000 by architect Marc Pinard, and construction began in 2001. The plot plan shows how here, unseen and to the left, there is more outdoor space than indoor – a rarity among city houses, where lots are small. So, the protective stance of this house is all the more meaningful because of the inclusion of exterior living space built into its design.

But, what is really remarkable is how out of place this house is and, at the same time, how perfectly in place it is. First, it was not newly built. It is a reworking of an old dairy barn that is two stories high with a mere 800 square feet of space. Repurposing aside, the simple but stylish addition of a corrugated metal wrap-around roof gives it the look of a small train station. The clean lines and lower roof, in addition to its unusual gate, resemble something that one might see tucked into a tight space in Tokyo – there is a definite Asian vibe to this small manse: the wooden fence, the metal work, the simplicity and functionality. The whole has a Modernist Medieval quality of a tiny monastery situated in a late 19th and early 20th century urban neighborhood. The 21st has landed. 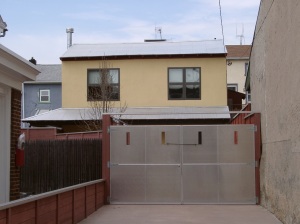