Sometimes, instead of a house being modernized, it can be “ancient-ized” to great effect. Context, too, is a large part of the equation when determining the Hip & Hidden–ness of a residence. Here is an unusual find, one that transports the viewer to another place and time – resembling an aging Tuscan townhouse.

First, it is rare to have stucco covering a brick facade in this East Coast city’s inner core.

And then to have a kind of pentimento, a layering of paint and cement colors revealing an almost time-lapse portrait of the building. The ghostly lavender with its whitewash effect and water marks, remnants that render a depth and imagined life of the structure that appears much older than the neighboring houses. It has the sage wisdom of the ages; embattled, weathered, cracked, peeling and still standing.

Possibly once vine-covered, it is still a living, breathing, more-organic-than-most dwelling that removed its front door from the street during its lifetime, leaving an imbalanced facade and a courtyard entrance. But what is not there is much of what makes it all so compelling; a relic, a survivor, an old world charmer, a tease with a misty past. Not an update, but rather a post-date. 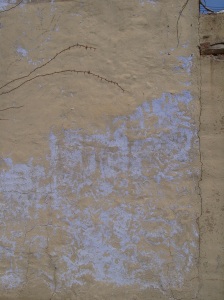