A Bau to this Haus

It might seem odd to speak of Modernist theory and its resulting architecture in a hip & hidden way; after all, the idea of Modernist thinking was to relate to nothing except pure function and formalism, rationalism uber alles: a utopian visionary truth-finding in the creation of intellectual theory derived from knowledge and mastery of nature, resulting in the building of a perfect machine. Doesn’t sound so much like hip as it does structured and rule-bound. 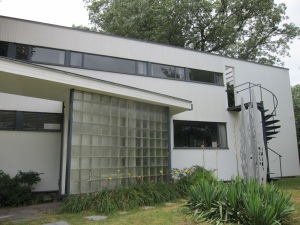 Racing down a country road, completely by accident we happened to spy the Gropius House, in Lincoln, Massachusetts. Talk about hidden! It was easy to miss, tucked casually back on a small lot, seemingly in the middle of nowhere. This iconic object was built by the icon himself (of the Bauhaus School) – Walter Gropius designed this home for his family in 1938, and the hipness of his design still holds with its simplicity and functionality as well as its diminutive size. The then-shocking use of industrial materials, positive and negative spaces, asymmetry and geometric forms all come together to stake their claim; and eighty-four years later, are still hip and standing.