Citadel in the City 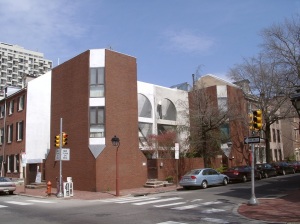 These adjacent, mirror-image townhouses together create a kind of gatehouse, signifying your entry into a section of town that is both old and new, changed and changing. Built in 1975 by Benjamin Martin & Associates, the two three-story houses have brick book-end towers that are chamfered, revealing a bit of the same stucco of the inner, recessed arched entrances.

Shock-ing as they were when they became among the first-built of the new gentrifying structures in the neighborhood of mostly 19th-century rowhouses, these geometric citadels seem almost classic now. The towers are like modern interpretations of pruned or shaved rowhomes, monumental sentinels that, although a little heavy handed, are stylistic landmarks having, along with the connecting arches, overtones of classical Roman architecture – a modern reference to an aqueduct or an arched bridge with massive piers. Their overall resonance is that of the ancient tradition of the walled city and its limited entry, and how that can often make life tolerable in a densely packed area. 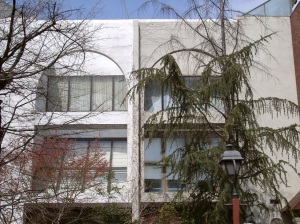 The houses have set-back courtyard entrances (always an urban bonus) with decorative metal louvered gates – practically the only ornamentation on fairly plain structures – and the plant material within the courtyards provides some relief from an otherwise hard-surfaced world.  Without their brick towers they might have looked more like odd and encroaching West Coast housing and been misfits in their midst, but they recede and at the same time stand out as contemporary takes on city housing. 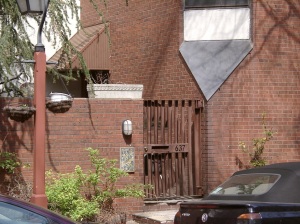