We were in New York City recently, strolling through the venerable Upper East Side townhouses that infill the quieter numbered streets. It was a meditation upon magnificent classic brownstones, peppered with occasional modern replacements or re-facements. We were noting a lack of authentic personalization … when suddenly we saw it. 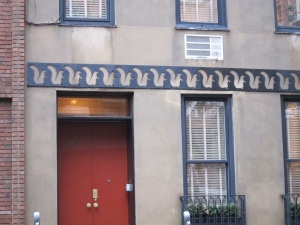 It was a grayish brownstone house, somewhat less regal or commanding or rich-looking than many of its neighbors. But it had a band of something, some design, stretched across its front, just above the first-floor entry door and windows. It seemed like something extra, but nothing special. We almost missed it. But we looked again and saw it: what that perhaps 18-inch-high strip of dark metal had punched out of it was a series of squirrel shapes – a long row of them, as if in a conga line. As if this was the leftover from someone having cut paperdoll squirrels. And, more, we then noticed that atop the newel posts flanking the front stoop were sculptures of, yes, squirrels.

Why? Who knows. But all of it was too expensive, too thought-out, too well-done an act to have been merely a whim – although whimsical, indeed. The metal band, the squirrel statues – these meant something to the people inside who designed them or paid for them to be designed and installed. Was it a tribute to the second-most widespread wildlife form in the city? (Perhaps somewhere, maybe in Greenwich Village, there was a similar homage to the pigeon?) Was it a play on someone’s name? Or was it just a work of subtle, friendly, individualistic, idiosyncratic art, symbolic of something or nothing, fashioned to catch the eye of people walking by, and make them stop, and smile, and wonder?

We don’t know. And, frankly, we don’t care. It broke up the monotony, it brightened our day, it personalized a city that can drub the spirit of anyone. It was, in its way, a buried acorn, happily discovered when needed.

Here was a decision to express something in design and to truly personalize one of the little shelters we call home. To create placeness, or arslocii, an operating concept in all our lives. To find our inner squirrel. 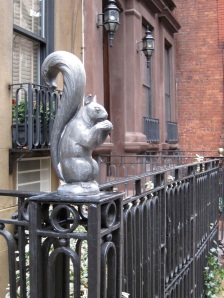